- October 12, 2015
HP has just released its newest all-in-one PC, the beautiful Enfy 34. This computer offers something unique, however, that other all-in-ones do not and that is a 34-inch curved panel. This is definitely a fancy computer to look at and, as a result, isn't cheap. 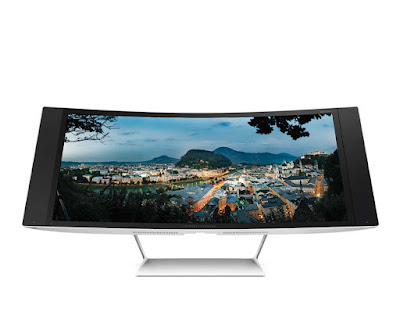 HP has added Intel's latest 6th-generation Skylake CPU and the screen itself is an IPS display, allowing for wide viewing angles. The screen also comes with a 3440 x 1440 resolution as well as 4.9 million pixels and a 21:9 aspect ratio. According to HP, the Envy 34's display offers 99% of the sRGB color gamut and also has Technicolor certification.

As far as CPU options are concerned, the Envy 34 comes with a Core i5 or Core i7 Skylake dual-core with integrated graphics standard. If this isn't quite good enough for you then you can always opt for the GeFOrce GTX 960A. Nvidia typically special OEM versions of its GPUs, which generally means that this version will be a bit slower than the consumer model.

In terms of RAM storage there is included 8GB or 16GB of DDR4 with storage options ranging from 128GB SSDs to as much as 2TB hard drives and hybrid drives. Naturally, the lower specs come with the base priced model of the Envy 34, which in this case will run you $1,800 USD.

If the Envy 34 seems a bit too big for you liking, the you will be happy to know that HP is also offering 27-inch and 24-inch models, known as the Envy 27 and Envy 24, respectively. Both of these versions mirror the internal hardware of the Envy 34, with the Skylake Core i5 and Core i7 chips as well as similar RAM and storage options. However, on these devices HP is giving consumers the option of AMD Radeon R7 or Radeon R9 graphics.

As far as all-in-ones are concerned, the Envy 34 from HP is definitely one of the best looking. What it's got underneath the hood is nothing to shake a stick at either. Solid RAM, solid storage space, solid processor, and a solid graphics card(s) are sure to make this all-in-one be at the top of many a computer lover's list.