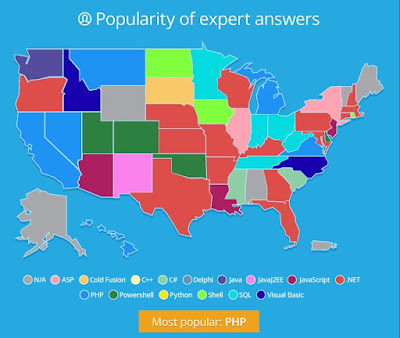 When it comes to programming languages, most people probably can't name more than 2. Popular answers to this question typically include languages like C++ or JavaScript, but there is a whole host of other languages out there for people to use. And just because you've never heard of one doesn't mean that it isn't the most popular programming language on the other side of the country.

Silicon Valley may be the hotbed of new and exciting tech, but most programmers and developers are working hard in other industries, like big business. A recent programmer Q&A from the site Experts Exchange delved deep into its own data to determine what exactly the most popular programming languages are in the United States.

If you look at the data and simply go off of the number of questions asked then it's clear to see that Microsoft's .NET programming language is seeing increased use. However, most people in the business are not surprised by these results. PHP is a script language that is pretty much the standard with web developers, despite the fact that a lot of programmers don't seem to like all that much. Going along with that, .NET is a Microsoft standard that isn't exactly the most talked about but it is a good entrance for coders who are just getting started with learning to build apps around Microsoft platforms, platforms which are widely used in the business world.

What this data also does is show those in the Silicon Valley that the popularity of the newest programming languages is insignificant when compared to the driving force of existing options. Some of the more trendy languages, like Ruby on Rails and Swift, don't even appear on the list.

So what are the most popular programming languages in the country? Here's the list:


Just to note, West Virginia and North Dakota didn't return any significant data....coders must not exist there.