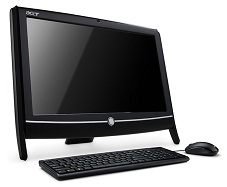 On Monday, Acer announced that its 23.8-inch Aspire Z3-710 Series of all-in-one desktop PCs are saving you some time by shipping with Windows 10. so you won't have to do the free upgrade from Windows 8.1.

The Z3-710-UR53 has a Core i5-4590T quad-core processor clocked at 2GHz with 6MB of cache and 8GB of RAM. If you're just using general purpose computing chores, it might not be worth the additional $150 as you only get 2GB of additional RAM. Even with the processor being an upgrade in cores and cache, it really is a downgrade in clock speed.

Looking for a Quote on a Desktop Rental for Your Business Event? Rentacomputer has a full range of Desktop Rentals for your event! Our short-term rentals are available in over 1,500 cities nationwide!

Acer says that both systems come with a slim 1.4-inch chassis with a display that can tilt from 5 to 25 degrees using only two fingers. If these don't sound as appealing to you, Acer still offers the Z3-710-UR59, which is a Windows 8.1 model, only at $700. It has an Intel Pentium G3260T dual-core clocked at 2.9GHz, 4GB of RAM, and 1TB HDD. All of the systems sound pretty cool and the fact that they are All-in-Ones is a definite bonus. You just need to find which one bests suits your needs.