Showing posts from July, 2015
Show all

Google Looking For Redemption With Google Glass For Enterprise 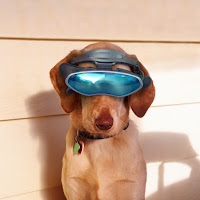 I guess the Science Fiction-esque future that Google Glass suggested in its ads is a little bit further ahead of us than Google realized. Google Glasses were all but a huge consumer flop. The general public just wasn't ready for goofy-looking, augmented reality glasses. But that doesn't mean this product is dead, at least not yet. According to a recent FCC filing discovery, 9to5Google revealed the next version of Google Glass. This edition will be geared towards applications that are used in the enterprise space, leaving out the novelty consumer-oriented functions that were featured in the first "Explorer Edition". The "Enterprise Edition" Google Glass is said to sport a larger prism display for a better augmented experience. This serves as an attempt to minimize eye strain many early glass users complained about. Additionally the Enterprise Edition will drop the Texas Instruments processor for an Intel Atom processor which will be faster and have better bat
Post a Comment
Read more
More posts