At $199 Will The New(er) Chromebook Finally Become Mainstream? 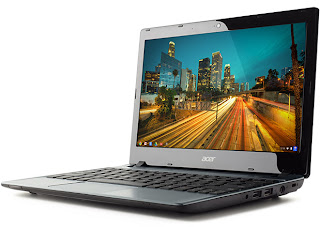 The move by Google is an unexpected but pleasant one. Releasing a brand new Chromebook by a different manufacturing partner a month after the release of the Samsung Chromebook begs the question as to why the two were not released at the same time? Regardless of the timing, Google is now looking to make this Acer Chromebook the first truly mainstream Chromebook laptop.

Google, with these two new laptops, and more specifically with the Acer Chromebook, is trying to get their Chrome Operating System into the mainstream computer world. Chrome Operating System, or Chrome OS, is a very basic and simple operating system that uses Google's popular web browser, Chrome, to operate. Users of Chrome OS do all of their interaction through the Chrome interface and can download and use applications from the "Chrome Web Store". Since the productivity and usefulness of this operating system is largely dependent on the internet, it has not become a huge success. With the addition of offline apps and the continual drop in price of Chromebooks, however, Google may finally see their product become mainstream.

While Google certainly has a long, and frankly impossible, shot of taking down Microsoft as the king of computer operating systems, they certainly are taking steps in the right direction. While the functionality of the Chrome OS may still be limited, the reduced price point for a "fully functioning laptop" is sure to attract many consumers. Only time will tell if the new $199 price point will be just what was needed to lure customers to their brand, but one thing is for sure, at that low price Google will get people's attention.