Showing posts from August, 2012
Show all 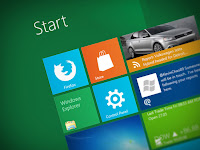 It appears as if Microsoft has entered into a naming dispute with European partner Metro Group over the design language for the company's upcoming operating system, Windows 8. Metro has long been used by Microsoft in reference to Windows 8 but, instead of fighting it out with Metro Group, Microsoft has simply decided to change the name. The new name that the company is using is none other than Microsoft 8 itself. Wow, what a change. According to sources from Microsoft, anything currently or formerly known as a Metro-Style application (regardless of the hyphen) will henceforth be referred to as a Windows 8 application. In addition to that, references to the Metro user interface will be replaced by a Windows 8 user interface and instead of using Metro design, Microsoft and everybody else involved with the project will use the term Windows 8 design. This news doesn't seem to be a big secret though as some OEMs seem to have gotten the message. Lenovo's new promo page for the ne
Post a Comment
Read more
More posts