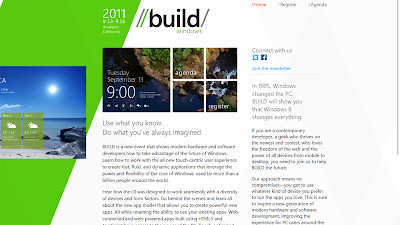 Windows 8, the highly anticipated followup to the hugely successful Windows 7 operating system from Microsoft, was displayed, albeit briefly, way back at D9. However, Anaheim is where the new OS is really going to kick off. Microsoft is starting its Build conference with a full-on developer preview of the new OS, code-named Windows 8 at the moment.

According to Microsoft's President of Windows and Windows Live Division Steven Sinofsky, Microsoft has been completely re-imagining the Windows operating system. In doing so the company has brought a lot of new capabilities that coders will be able to dive into sooner rather than later.

The new "Metro-styled" user interface is right up front and brings new graphical elements of the Windows Phone 7 to your desktop, laptop or tablet. In addition to that, Windows 8 will also come with Internet Explorer 10 pre-installed as well as a more intense focus on apps that have the ability to communicate with each other.

If you have been using Windows 7 for a while now and you are used to it, you should have no problem making the switch to Windows 8. Windows 8 is built primarily on the same foundation as Windows 7 though the retooled Task Manager and Windows Explorer should tease your interests a little more.

The new Windows Store will allow developers to present their apps to any country that has availability to Windows 8, and support for ARM-based chipsets is also proudly included along with x86 compatibility. What this basically means is that every device from a small tablet to a large custom PC will be able to easily handle everything Windows 8 has to offer.

Microsoft has also confirmed backwards compatibility with "devices and programs" that support Windows 7. In addition to that it has also been said that developers will be able to download the Windows Developer Preview from the new Windows Dev Center later on in this week, though no official date has been specified.

I don't know about you but I am thoroughly excited for Windows 8. I can't wait to get my hands on this new operating system and start exploring all the new features it has to offer!

What are the Top 10 Money Making Missions?

What other companies have joined and what do they do?

How do I join the
Tech Army Organization ?