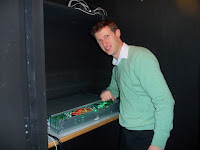 When it comes to computers, most people expect theirs to be outdated within four years or less, depending on how you treat it. When Jonathan Hefter, CEO of Neverware, a start-up company out of New York City, was asked what he thought about the issue, he laughed and said, There are two things in this world planned for obsolescence. Computers and pantyhose. They are designed for the dump."

Hefter was not always into computers. He began as an undergraduate at Wharton at the University of Pennsylvania where he was studying economics. However, that goal was short-lived when, after not desiring to go into finance after graduation, Hefter spent a year in the basement of his parents' house tinkering with things. The concepts of networks come to Hefter naturally, even though he had never taken a course in computers. Hefter had a dream, a dream to create sustainable computing. While Hefter was trying to make that dream a reality, he came up with the world's first "juicebox", a nifty piece of virtualization technology.

In the earlier part of 2010, Hefter set up two technology pilots in schools around his area. The success of these pilots proved to Hefter, as well as others, that his concept could work. From here things only went up as in the spring at the Kairos Society's Annual Summit Hefter was approached by Polaris Partner Peter Flint. Flint invited Hefter to become a resident of Dogpatch Labs.

Hefter founded Neverware in May of 2010. Neverware is a company that you could call the "fountain of youth" for computers and recently moved into New York City's Dogpatch Labs. The cream of the crop for Neverware is definitely the JuiceBox a100, a single server appliance that will power up to one hundred old desktops with Windows 7 when added to the network. According to Hefter, "For a school in Africa, give them a LAN, one juicebox and the computers that corporations throw out and they suddenly now have the latest technology. Think about the implications in terms of education!"

This idea is not new, however. "This has been done but not since the 60's," said Hefter. In the 60's we relied on mainframe computing and one super powerful computer could support dozens of terminals. Since then though, computer power has become much faster and much cheaper and quicker than networking technology, which is why we have switched to local PC models. However, the PC model is extremely wasteful in terms of energy consumption and pollution. Old computers have to be destroyed and when they get thrown into a landfill or burned in an incinerator, they release a lot of toxic elements like lead, mercury and barium. Every juicebox that is set up acts like a new network. It is extremely green, not causing as much pollution and is energy efficient.

"Being able to build and successfully create the juicebox concept came in part from my own naiveté because I hadn't been involved in the industry so I had no clue that certain things just weren't done. This allowed me to develop as if those barriers did not exist," Hefter explains.

Overall, Hefter has created four juicebox machines, three real ones and one mobile demo. There is a great deal of freedom in the design of the juicebox thanks to the great flexibility of the device. Hefter's main focus here is on education and trying to give schools and educators the latest and most up to date technologies. Hefter wants to give the developing world an edge because he believes this is the place where he can be most distributive.

Pricing is still being worked out by Neverware, but they will likely come up with a more crowd pleasing software-as-service model. So I guess it is safe to say that the JuiceBox a100 will cost a fraction of a traditional desktop. The current juicebox can only support 100 units, though Hefter is in the process of making a 150 version juicebox very soon. Check out the video below where Hefter demos the JuiceBox a100 and his 10-year old Pentium 3 computer with missing hard drive and his laptop, which he uses as a keyboard and monitor.